DIRECTOR, DESIGNER and WRITER, MONICA MANGANELLI‘s visually arresting work is usually known for the intersection of theater, opera and film production, for its cinematic elegance, abstract yet visceral staging, and a multidisciplinary merging of narrative heft, visual dramaturgy and design. MULTI and INTERDISCIPLINARITY are the center of her work. Her current projects as director, visual/video & set designer include new films, debuts and performing arts productions that continue to blur and explore the lines between film, visual art and music-opera.

Biography: Born in Parma (ltaly) in 1977, studied Architecture at the Institute of Art (Bachelor in Architecture). In 2002 she graduated from the Parma University with an Academic Degree in  Conservation of Cultural Heritage  (ART HISTORY and ARCHITECTURE’s Specialization). She followed an additional year specializing with a Postgraduate Academic Degree in “Theater’s Set Design” and a Master in Cad Design e Computer Graphics in Reggio Emilia (2002-2003).

Then, in 2006,  Monica moved also in the FILM PRODUCTION definetely, and now she is  also specialized as VFX Art Director/Concept Artist and Creative EventDesigner.

In 2014 she collaborated with Event Creative Director Marco Balich and his creative team for the event show OPERA ON ICE at the ARENA of VERONA and other events projects.

CURRENT and FUTURE PROJECTS: Now she is focusing on projects and productions regarding  DIRECTION&Dramaturgy, and Creative Visual Design for  film and music-opera house productions, and cultural events.

She signed in 2015 as film director her first short animated film: THE BALLAD OF THE HOMELESS (La Ballata dei SenzaTetto ) with the co-production of Emilia Romagna Film Commission. Short selected in 50+ international film festival, won prestigious awards among:

Monica signed the set design and videoscenography for the Opera House Seasons 2016-21 for many theatrical opera productions:

In 2019, Monica completed, as film director, BUTTERFLIES IN BERLIN (animated docu-drama film) about Homocaust, set up during the 30’s and 40’s in Berlin, in collaboration with RAI CINEMA and EMILIA ROMAGNA FILM COMMISSION. Film screened at prestigious worldwide film festivals (100+)  and winner of illustrious awards (25+), with a great critical and public consensus. In distribution on AmazonPrimeChannel+HERE TV for North America. Film received in 2021 the Recognition of “Italian Original Expression” for merits from the Italian Ministry of Cinema and Culture.

She is now in post production with her new film (documentary) THE BLACK CHRISTS-Far From Justice, based on Tulsa/Oklahoma massacre in 1921.

Monica is also in development as film director for her new feature animated film, TURANDOT-Princess of China , and she is developing her first live action film THE OPERA SON, and some projects about baroque operas.

She was awarded in 2015 the Prize San Martino for artistic merit by the city of Noceto (PR) with the following motivation: “For a versatile and highly innovative artist who has achieved prestigious international awards, proving to be able to combine the talented professional skills developed with passionate determination, a sensitivity able to translate reality into stories and striking images of authentic poetry, open to messages of courage, solidarity and hope “.

In 2018, Monica was invited as special guest-speaker (as only woman) by Iranian National School of Cinema  in collaboration with Iranian Culture Ministry for the international conference, on the subject of “Cinema in the Digital Age”, to talk about “Interdisciplinary of the arts: Skills/Experiences- oriented relations between cinema and other artistic fields such as theater, exhibitions, animation and video-installation in the digital age”.

In 2020 she was invited among the speakers of the Conference organized by the University of Salerno and Linea D’Ombra Film Festival regarding: “ECONOMIC AND DIGITAL AUDIOVISUAL CULTURES, between alliances and conflicts”. 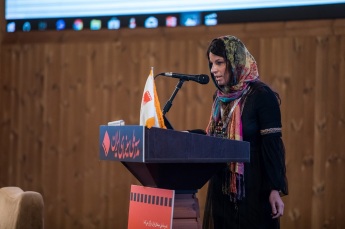